Ocala’s first Federal Post Office and Courthouse was built in 1908 and was razed in 1965 after construction of a new facility. The old building could not be used for local government or school board offices because the structure was sinking and renovation costs were too high.

In 1961, a new 70,000 square foot Federal Building and Courthouse was completed. When opened, the new facility housed 12 federal agencies, including the United States District Court. In 1984, by a special act of Congress, the building was officially named the Golden-Collum Memorial Federal Building and United States Courthouse to honor veterans from Marion County who died in the Vietnam War. Private First Class Harold Golden, who died on November 8, 1965, was the first resident of Marion County to die in Vietnam, and Captain William Edward Collum, who died on April 23, 1971, was the last. Golden was 18; Collum was 21.

Although the United States Post Office has moved to new facilities, the building continues to house the Ocala Division of the court and other federal agencies. 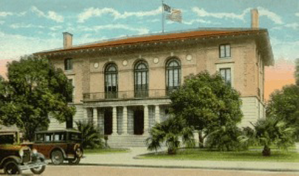 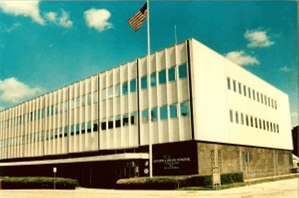 The Federal Post Office and Courthouse, circa 1908 (left) and the Golden-Collum Memorial Federal Building and United States Courthouse, built in 1981 (right)