Jacksonville is one of the oldest venues in the district for a federal courthouse. An ornate 1895 structure served as a post office, the home of numerous federal offices, and the district court. It survived the Great Fire of 1901 but was replaced by a larger and equally ornate building on Monroe Street in 1933. That courthouse, with massive marble hallways and, wood-paneled courtrooms, served as the United States Courthouse and Post Office until 2003. That year, construction was completed on the present courthouse. The old courthouse is now used by the State Attorney for the Fourth Judicial Circuit.

Near the heart of historic Jacksonville, almost on the same site as the previous buildings, the current courthouse has state-of-the-art courtroom technology and the highest levels of security. In 2006, President George W. Bush signed a bill designating this courthouse as the John Milton Bryan Simpson United States Courthouse. Judge Simpson was appointed to the federal bench in 1950 and joined the Middle District in 1962. He later served on both the Fifth and Eleventh Circuit Courts of Appeals. His decisions were instrumental in desegregating schools and other facilities in the Middle District. The United States District Court, the United States Bankruptcy Court, and two judges of the United States Court of Appeals for the Eleventh Circuit occupy the courthouse. 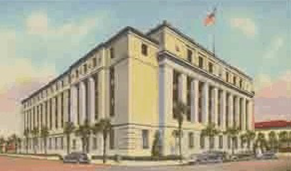 Remarks of Bryan Simpson at Lake County Courthouse, Tavares, Florida, on Veterans' Day, November 11, 1954, at the Unveiling of a Portrait of his Grandfather (PDF)