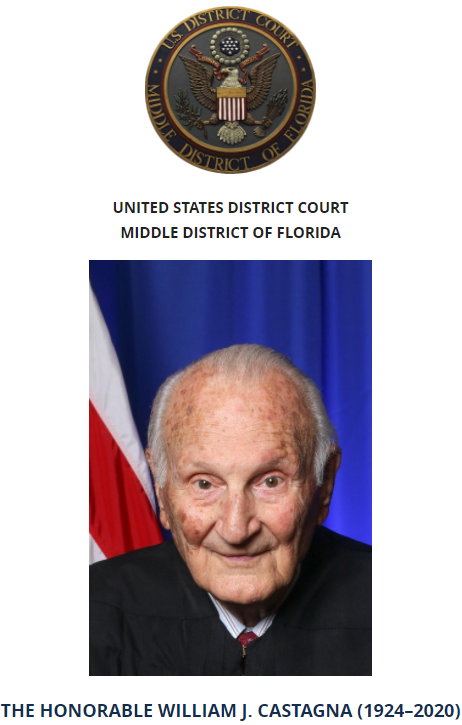 A "great American"; "wise judge"; "patriot"; "wonderful colleague"; "dear friend"; "valued mentor"; "inspirational"; and "true gentleman" were the immediate thoughts of the judges and the entire court family of the Middle District of Florida upon learning about the passing of United States District Judge William J. Castagna, who peacefully passed away on December 18, 2020 at the age of 96 surrounded by family members.

Judge Castagna was an active leader in the local community by serving many bar and civic affairs, including serving as President of the Clearwater Bar Association; as a member of the Civil Rules Committee of The Florida Bar; as a member of The Florida Bar Board of Governors; and as elder in Peace Memorial Presbyterian Church, including as a proponent of its Child Development Center. Judge Castagna lived an active life, as he enjoyed fishing, snow and water skiing, and tennis.

In 1970, Judge Castagna joined the firm of MacKenzie, Castagna, Bennison & Gardner, where he practiced until his appointment to the federal bench by President Jimmy Carter in 1979. Judge Castagna first served the Middle District of Florida as a district judge in the Court's Jacksonville Division from 1979 until 1981. Thereafter, he relocated to the Tampa Division, where he continued his active judicial duties through June of 1992, after which he attained the status of a Senior United States District Judge.

Throughout his 41 years of service in the Middle District of Florida, Judge Castagna remained a beloved leader, mentor, colleague, and friend, who served the District with integrity and humility. Intelligent, fair and dedicated, Judge Castagna created a welcoming atmosphere in the courtroom, to ensure all parties and lawyers had equal access to justice. Judge Castagna left such a tremendous impact on so many who are forever grateful to him.

A life well lived in service to his faith, family and country, Judge Castagna leaves behind a lasting legacy of a humble and dignified husband, father, lawyer and judge.